The Lakeland Lakers have long been represented by a line drawing of a wave and a simple "L" on uniform caps. Additionally, the Lakers do not have a mascot, previous attempts through mascot design contests never resulted in a clear winner. The athletic department thought it was time for a change.

Working with Lakeland's marketing and communications department along with an outside design agency, the Lakers are proud to present a new athletics logo that incorporates a mascot.

The creative process began with the understanding that the "Lakeland Lakers" name was well-known and recognized and therefore, would not be altered or changed.

After the discovery stage, it was determined the design would leverage the recognition of Lakeland's already existing type style logo to form the basis for the new Lakers logo typography.

The next stage of concept development was to create a mascot character that would be visually associated with the name "Lakers."

Together, the stylized type solution and mascot character were developed into a singular unifying brand for use with all of the college's athletic programs. 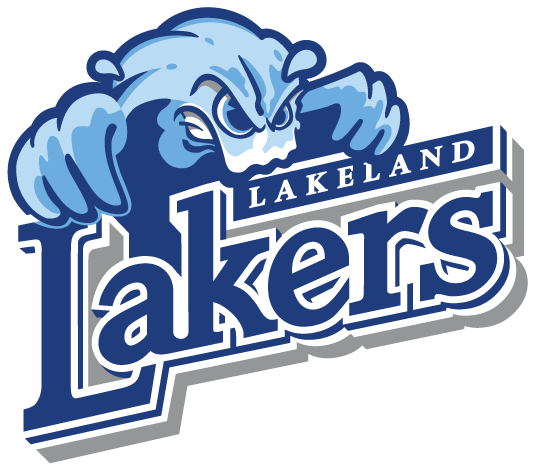 The final design combined the character glyph and typographic solution which was then colorized to complement the college's brand colors with an obvious focus on the blue. The glyph can also be used as a standalone symbol of the "forward momentum toward a winning attitude" that all Lakeland athletes aspire to have.

The secondary logo glyphs incorporate sports balls and are meant to offer personalization to each sport and athlete.

Marketing presented dozens of potential names to our student athletes and coaches, who helped narrow down the options to these two finalists:

Breaker – A breaker is a wave breaking into foam against the shore. Breaker the mascot is forceful and takes challenges head-on. Watch for Breaker the Laker to surge past the competition.

Crash – The name Crash evokes the images and sounds of high waves crashing on the shores of Lake Erie. Crash the mascot is powerful and ready to roll. Watch for Crash to smash the competition.

After a close campus and community vote, our mascot was named Crash. Thank you to everyone who participated!