This 60-member symphony orchestra, formed from Lakeland students and community members and containing both amateur and professional musicians, performs the finest in classical, contemporary, and pops orchestral music for the Lakeland community. The Lakeland Civic Orchestra is led by Dr. Matthew Saunders and concertmaster Sarah Icardi.

The Lakeland Civic Orchestra also sponsors an annual Young Artists Concerto Competition for talented musicians age 18 and under. Winners perform a concerto with the orchestra during the following season, and have included many of the finest young musicians in Northeast Ohio.

Lakeland students and community members are encouraged to audition for the Lakeland Civic Orchestra. 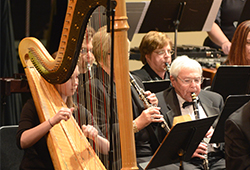 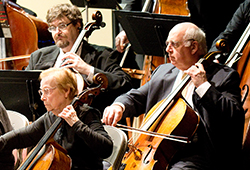 WHO IS ELEGIBLE: All college students and community adults.

WHEN: During the fall and spring semesters, the civic orchestra holds rehearsals every Monday evening from 7:45-9:45 p.m.

REQUIREMENTS: All performers must have sight-reading skills, have had prior ensemble performance experience (at least two years at the high school level), and be able to commit to Monday evening rehearsals and two to three performances during each semester. Most performers must provide their own instruments, and percussionists must provide their own mallets. 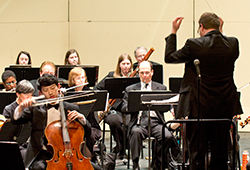 The Lakeland Civic Orchestra began in September 1937 as the Lake County Symphony Orchestra Association, founded by. Lorna Nighman, its first director, leading musicians from Lake and Geauga counties. By February 1938, the group had grown to 30 members, and in June 1938, presented its first concert at Painesville Baptist Church. In 1951, the orchestra reorganized and renamed itself the Lake County Symphony Orchestra.

Around 1955, Charles Ruddick organized and began to lead the Willoughby Community Orchestra, a group providing concerts in the parks and other service functions. In 1970, the groups merged to become the Lakeland Civic Orchestra under the aegis of the recently-established Lakeland Community College.

Since then, the Lakeland Civic Orchestra has pursued the dual missions of providing Lake County residents with opportunities to play and hear orchestral music, while fulfilling the performing ensemble requirement for many Lakeland Community College music students. The annual Young Artists Concerto Competition has been an important step in the careers of budding young musicians, with the winners performing with the orchestra as soloists. Additionally, the orchestra has collaborated with choral ensembles, including the Lakeland Civic Chorus, and with the wide range of professional soloists and composers in Northeast Ohio.

For many decades years, the musicians of Lake, Cuyahoga, Geauga, and Ashtabula counties have come together to bring orchestral music to our community. They rehearse one weekday evening per week because of their passion for music and love for the act of music making. Join us for the next phase of our history!

Dr. Matthew C. Saunders has taught music from kindergarten to college in styles from madrigal to mariachi, and strives to make beautiful music for and with captivating people. He has climbed mountains, saved someone's life, and watched the moon rise over the prairie. He has loved, lost and loved again; helped friends find salvation, and found it for himself as well; taught genius students, and learned from genius teachers. His dreams are to walk on Mars, hear a grand piano fall into an orchestra pit, make more people laugh than cry, and love his wife Becky passionately and forever. He plays trombone and is always getting better at playing piano, and in the course of a long, love-filled, productive life, he wants to compose the Great American Symphony, ride the rails, hike the trails, read all of the good books, finally watch "The Godfather," and storm the castles in the air. He will never write unlistenable music, stop stargazing or lose money in Vegas. He doesn't call his mother often enough, but he still tries to do a good turn daily. He is always up for a few hands of euchre or a good game of chess, likely winning the former and losing the latter.

Dr. Saunders is professor of music and music department chair at Lakeland Community College, where he teaches courses in music appreciation, popular music, music history and first-year experience, and directs the Lakeland Civic Orchestra. Prior to coming to Lakeland in 2012, he held the position of associate professor of music and director of bands at Oklahoma Panhandle State University from 2007 to 2012. He received degrees in music from the University of Cincinnati College-Conservatory of Music and The Ohio State University. Dr. Saunders studied composition with Donald Harris, Thomas Wells, Jan Radzynski and Wes Flinn, and trombone with Joseph Duchi and Tony Chipurn. His 20 years' experience in music education includes teaching band; general music; and music theory in public elementary, middle and high schools, and colleges and universities, in rural, suburban and urban settings in Ohio, Georgia, and Oklahoma.

Dr. Saunders' original compositions have been performed across the country, including performances at national conferences of the National Flute Association, the International Horn Society, the Society of Composers, and the College Music Society. He has presented his research at conferences of the College Music Society, the Society of Composers, the Oklahoma Music Theory Roundtable, and the Aspen Composers Conference. His works for large ensemble have been performed by the McConnell Arts Center Chamber Orchestra (Columbus, Ohio), the Marquette (Michigan) Symphony Orchestra, the Southwest Florida Youth Orchestra, the New Music Guild Festival Orchestra, the University City Symphony Orchestra (Missouri). They have also been performed by the orchestras of Florida Gulf Coast University and Westminster College, and the bands and wind ensembles of The Ohio State University, Kansas State University, West Texas A&M University, Kutztown University (Pennsylvania), Dennison University (Ohio), Oklahoma Panhandle State University, Garden City (Kansas) Community College, and Sinclair Community College (Ohio). Locally, his works have been performed by the Lakeland Civic Orchestra, the Lakeland Civic Band and at Lorain County Community College. He has collaborated on original compositions with members of the Minnesota Orchestra and the Toledo Symphony Orchestra, and faculty members from South Dakota State University, University of Minnesota at Morris, Minot State University (North Dakota), Eastern New Mexico State University, New Mexico State University, and Eastern Illinois University. He performs as a trombonist, and was featured soloist in the premiere of his concert piece for trombone and wind ensemble "Homo sapiens trombonensis," and presented the first complete performance of his epic unaccompanied trombone work "Twenty Views of the Trombone" in Atlanta, Georgia, in February 2017, after performances and premieres of portions of the piece in New York City; Norman, Oklahoma; Aspen, Colorado; and Cleveland (at both MOCA Cleveland and for the Cleveland Composers Guild). In Northeast Ohio, Saunder's works have been performed by the Blue Streak Ensemble and the Gruca White Ensemble, the Chamber Music Society of Ohio, the Solaris Wind Quintet, and Oberlin Choral Spectrum. He received the 2007 Ruth Friscoe Prize for composition, was the Oklahoma Music Teachers Association 2011 Commissioned Composer, and is a five-time recipient of the ASCAP Plus Award. He was elected to membership in the Cleveland Composers Guild in 2012 and has served as secretary since 2015. Dr. Saunders' compositions are published by Imagine Music and martiandances.com, and he has written articles for "The Journal of Band Research," "Music Educators Journal," "The Chronicle of Higher Education," and "The Instrumentalist." He is on the web at www.martiandances.com, but the physical Dr. Saunders lives in Willowick, Ohio, with his wife Becky and their children Noah and Melia.