The Lakeland Civic Band is a concert band/wind ensemble composed of Lakeland students, high school players, school music teachers, directors and community musicians. The band is one of the few community college groups recognized with the John Philip Sousa Foundation's Sudler Silver Scroll Award for musical excellence and service to the community. The Lakeland Civic Band is currently under the direction of Daniel Crain during spring and fall semesters and Frank T. Cosenza during the summer term. 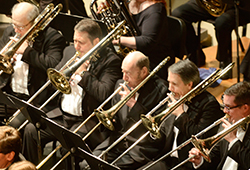 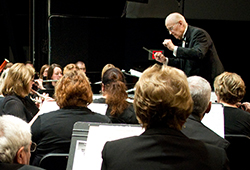 WHO IS ELEGIBLE: Lakeland students and community members are encouraged to audition for the Lakeland Civic Band.

WHEN: The civic band holds rehearsals every Thursday evening from 7:45-9:45 p.m.

REQUIREMENTS: All performers must have sight-reading skills, have had ensemble performance experience (at least two years at the high school level), and be able to commit to Thursday evening rehearsals and two to three performances per semester. Most performers must provide their own instruments, and percussionists must provide their own mallets. During summer term, the band performs outdoor concerts. 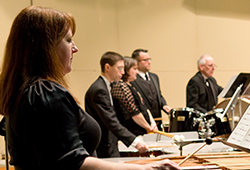 The Lakeland Civic Band has been honored by invitations to perform for national, state and regional conferences including the Ohio Music Education Association Conferences in 1980, 1985, 1991, 2003 and 2006; the North Central Regional Conference of the College Band Directors National Association at The Ohio State University in 1982; the National Convention of the American School Band Directors Association in Columbus, Ohio in 1993; and the National Convention of the Association of Concert Bands in Lisle, Illinois in 1998. The civic band and chorus were invited to perform at the Chautauqua Institute in 1997, 1999 and 2002. In 1997, the Lakeland Civic Band received the Sudler Silver Scroll Award presented by the Sousa Foundation in recognition of musical excellence and service to the community. The Lakeland Civic Band is one of the few community college groups that have received this award based on an evaluation of continued musical achievements and performance tapes.

Daniel Crain is the director for the fall and spring civic band. He has been a public-school music educator for 15 years. This is his seventh year as a music teacher and band director in the Shaker Heights City School District located in Shaker Heights, Ohio. His responsibilities include: High School Symphonic Band, Seventh Grade Concert Winds, High School Jazz Band and Music Composition. Crain also assists with the Pride of Shaker Heights Raider Marching Band and the Seventh and Eighth Grade Symphonic Bands. Prior to his appointment to Shaker Heights, Crain taught five years in the Mentor Public Schools, Mentor, Ohio, where he was the head concert band and assistant marching director. Crain also taught middle/high school band in Youngstown City School District for one year and middle/high school band in the Perry Local Schools in Massillon for two years.

A native of North Royalton, Ohio, Crain earned his Bachelor of Music Education degree from Bowling Green State University in 2003 and his Master of Arts in Music degree from Case Western Reserve University in 2008. Crain has completed additional graduate coursework in conducting and music education at Capital University, Case Western Reserve University, the University of Texas at Austin, and Northwestern University. In addition to his responsibilities at Shaker Heights, Crain has been involved with the Cleveland Youth Wind Symphony (CYWS) organization for over 17 years. He served as the conductor of the CYWS II Concert Winds from its inception in 2009 until 2016, and he currently serves as the organization's co-music director and head conductor of CYWS Group I.

Crain was appointed as the director of the Lakeland Civic Band at Lakeland Community College in May 2017. He has been a member of the Lakeland Civic Band since 2008. Crain has also been an active volunteer for the Ohio Music Education Association, serving as the District 7 secretary/treasurer from 2013- 2015, the District IV & VII High School Honors Festival chair from 2013-2014, and on the Properties Committee for the 2015 and 2017 Professional Development Conferences held in Cleveland, Ohio. In June 2019, Crain was nominated and admitted to the American School Band Directors Association (ASBDA).

Frank T. Cosenza is a veteran band director of over 32 years and retired from the West Geauga Local Schools where he was a four-time recipient of the Excellence in Education Award. He served as interim director of athletic bands/concert band at Kent State University for the 2012-2013 academic year where the Marching Golden Flashes performed in the MAC Conference Championship and the Go Daddy.com Bowl. He previously taught in Mentor, Parma, Mansfield and North Ridgeville school districts.

Concert bands under his direction have received consistent superior ratings at OMEA large group adjudicated events. He has served on the Content Validation Panel for the National Board for Professional Teaching Standards and has been on the staff of American Music Abroad taking student musicians to Europe. Additionally, he served as assistant director of the All-Ohio State Fair Band. Cosenza is an elected member of Phi Beta Mu- International Bandmasters Fraternity, the American School Band Director's Association and Tau Beta Sigma honorary.

As a member of the Ohio Music Education Association, he has served as state treasurer/trustee, district president, All-State co-coordinator, member of music selection committees, adjudicated events chair and current adjudicator. He was the 2006 recipient of the Distinguished Service Award for OMEA District VII and was chosen as the "Honored Teacher" at West Geauga High School in 2010. He has served as guest conductor/clinician in Nevada, Florida and throughout Ohio as well as an adjudicator for "Music in the Parks/Festivals of Music."

Currently, he is the summer conductor of the Lakeland Civic Band and also conducts concert bands for the Cleveland Federation of Musicians and the Windjammers Unlimited (Circus Music Historical Society.) He was formerly associate conductor of the Medina Community Band. Cosenza is co-principal trumpet with the W.D. Packard Concert Band and Big Band Sound of Warren, and has played for many shows and artists including: Frankie Avalon, The Manhattan Transfer, Wayne Newton, Johnny Mathis, Holiday on Ice, the Ringling Bros. Barnum & Bailey Circus and Ludwig Masters recordings. He is a Conn-Selmer endorsing artist and received a Bachelor of Music degree from Bowling Green State University and Master of Music from the University of Akron where he recently received the Distinguished Music Educator Alumni Award for 2020.